Perhaps you are a new chef, deer hunter or just a food enthusiast but have you thought how much value a boning or fillet knife can add to your craft? Ever wondered what differences set these two types of knives apart?

If you would like to know the scores in the boning knife vs fillet knife debate, you are at the right place.

First, the two knives look so much alike so it is understandable if you confuse one for the other. If you are interested in the precise cutting of your meats or fish, it will definitely pay off to know what tool to use and why.

If you’re a deer hunter, chances are that you’ll need a strong but flexible knife to separate the meat from the bone.

On the other hand, if you’re an angler, you probably are interested in something that can slice smoothly and cut out a chunk of fish meat leaving out the bones.

So, can you use the boning knife for filleting or vice versa? Let’s explore.

How to Sharpen a Fillet Knife

How to make braided loops

How to oil a fishing reel

What the Knives Are Used For

The key distinguishing factor between these two knives is their purpose or common use. Boning knife uses range from detaching meat from bones to removing the skin from the meat.

On the other hand, the fillet knife is used to separate skin from meat and is mostly used by anglers.

It is important to note that some people will use these knives interchangeably, which means that that they will use a fillet knife to debone fish and a boning knife to fillet fish.

While this is somehow acceptable especially when you have no other choice, you should know that the consequences of doing that will have an effect on your quality of cuts and the ease of use.

A fillet knife can separate bones from meat albeit small fish bones.

Conversely, a boning knife such as the renowned Wusthof Classic can be used in filleting a fish, but be prepared to struggle with the knife while performing the task because there will be some rigidity.

Ultimately, you may still have meat sticking to bones and fish bones stuck in meat. The last thing you want is a shoddy job.

Therefore, while both knives can be used for either purpose, each has its optimal area of functionality. Using the right knife for the right task will make the task easier for you and give cleaner cuts.

When you look at both knives, you will realize that they are thinner than ordinary kitchen knives in terms of design.

This design is of great importance as it plays a crucial role in the level of accuracy that the knives need to make complex cuts.

Nevertheless, the similarity of these knives ends there because there are some major differences between the knives as well.

For instance, the boning knife is much thicker and stiffer compared to the fillet knife reason being that the former is used to separate tough meat chunks from bones.

It therefore makes sense for it to be strong.

The latter, are more flexible and thinner because they are used to make intricate cuts. However, the flexibility of fillet knives calls for you to be extra careful and not apply excessive force because it may break. 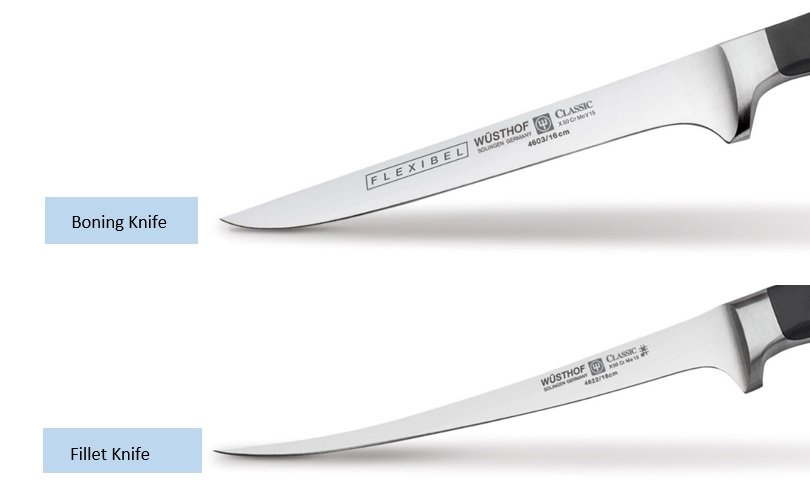 Image for illustrative purposes only.

Another clear difference in the boning knife vs fillet knife contest is the curve of the blades. Generally, boning knives are straight all the way to the sharp tip of the blade.

The sharp tip is crucial as it allows for piercing of meat with ease. That said, the boning knife looks a lot more like your regular kitchen knife.

On the other hand, the fillet knife blade has a distinct ascending curve and consequently curved tip. It is the curved nature of this knife that makes it more or less useful when used in cutting tasks.

How to clean a fishing reel

Fillet and boning knives can both be made using stainless steel or high-carbon steel. However, some chefs and anglers would rather use knife blades made of high-carbon steel since they tend to hold their edge for longer and are sharper.

Even with that, high carbon steel corrodes easily so there are those who prefer to use stainless steel knives. Stainless steel does not rust and is easy to clean.

There have been claims that stainless steel knives are not as sharp and while there may be some truth to such claims, you should always endeavor to get high-quality knives that are very sharp.

Irrespective of the blade material you pick, ensure that it holds its edge well and is sharp enough. Doing that is of great importance since it will determine whether your filleting and deboning tasks are effortless and you will not spend much time sharpening your knives.

Apply this same advice to your regular camping and kitchen knives and you are good to go!

The price of the fillet or boning knife you purchase will largely depend on the brand you are buying from.

Nevertheless, both knives are relatively more reasonably priced or at least cheaper than a regular chef’s knife.

These knives will often not cost the same as the boning knife tends to be a little costlier compared to the fillet knife because of its versatility and thicker blade material.

No need to worry though because the difference in pricing is often not as considerable. You can actually get a generic boning knife for about $20 or slightly less. If you want a branded knife, you might have to part with around $150 or a bit more.

The same goes for the fillet knife. Reputable brands will sell for about $150 but if you are hard on cash you can go for a generic brand that costs as little as $15 or even less.

Again, the material used to make it and the brand determines the price. 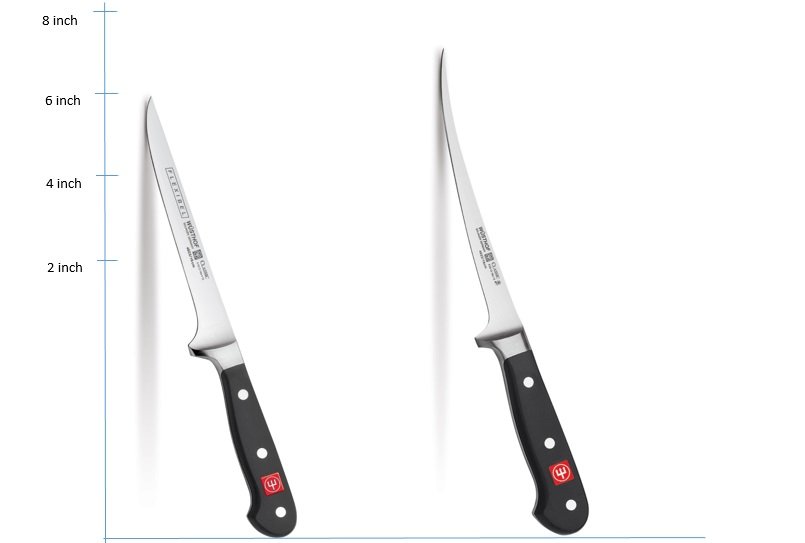 Image for illustrative purposes only.

Like all other knives, fillet and boning knives come in different blade lengths. Of course, the length of knife blade also determines the kind of results it is able to deliver.

Fillet knives can go up to nine inches in blade length.

What you need to note here is that shorter fillet knives are ideal for filleting smaller fish, while longer ones are best for bigger fish. If you are an angler, we recommend carrying a medium-sized fillet knife as it will be able to give decent cuts for any fish size.

Generally, boning knives come in five and six-inch blades but it is common to see some knives that have more or less inches than the recommended length range.

Features of a Good Fillet and Boning Knife:

If you want to get your hands on a good boning or fillet knife, consider the following.

Note: With a manual knife, you are less likely to waste meat and you have better control. Moreover, manual knives are less expensive than electric ones, not to mention more economical as well.

Just as we mentioned before, both the boning knife vs fillet knife debate is here to stay. But generally, both types of knives are thinner than other types of knives.

This makes them great tools for making those complex and precise cuts. Whether you are a butcher or a chef, you will realize that owning both knives is essential.

For anglers, having them both may come out as extravagant but nothing should stop you if you are able to get them both.

Nevertheless, when it comes to picking between the fillet and boning knife, it is important to keep in mind that each knife comes with its own benefits and drawbacks.

We recommend having both so that you are able to do whatever is required with ease.

How to anchor a kayak in a river 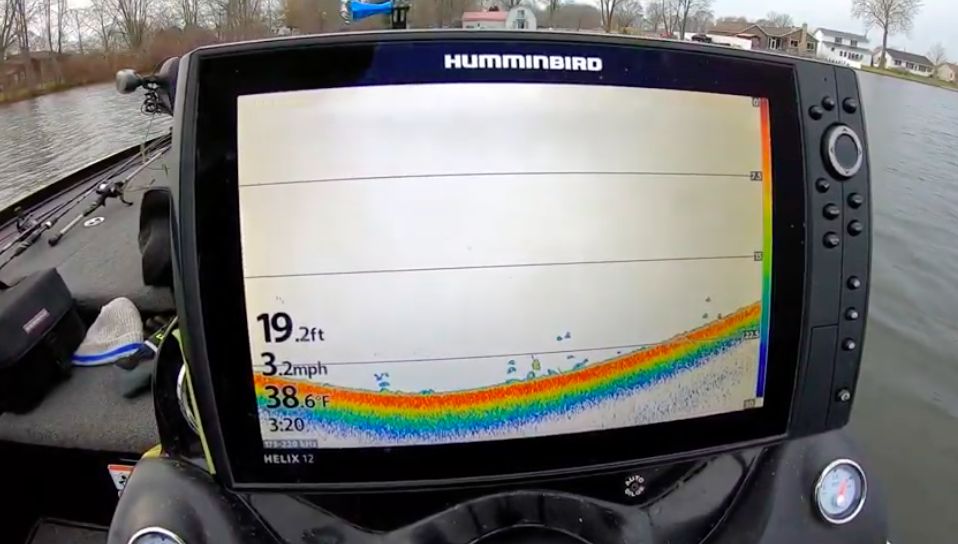 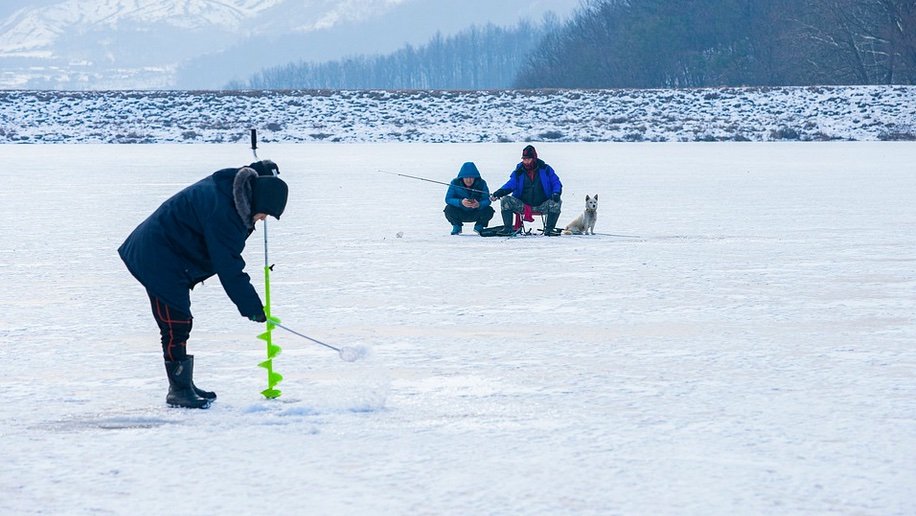 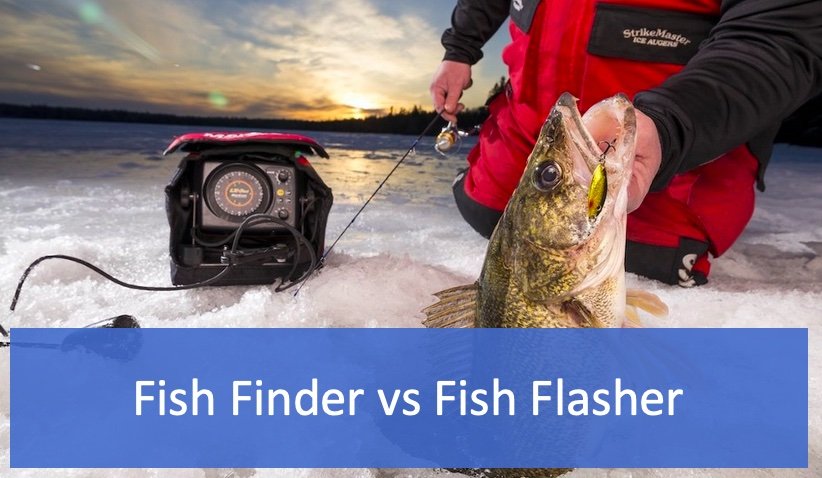